Which marketing automation tool has the most users? Separating the two isn’t easy, given that companies like Hubspot and Marketo cater to both markets. For the sake of simplicity, if we assume that 85% of Hubspot and Marketo’s users are small businesses, and 15% enterprise, we can create a more realistic picture of which vendors are likely to be leading each market. Let’s start by looking at the small business marketing automation market.

Which marketing automation tool has the highest market share among small businesses?

For the small business market, Hubspot are the clear leaders in customer volume with a 41.6% market share, followed by Infusionsoft with 32.8%, and Marketo with 12.6%. 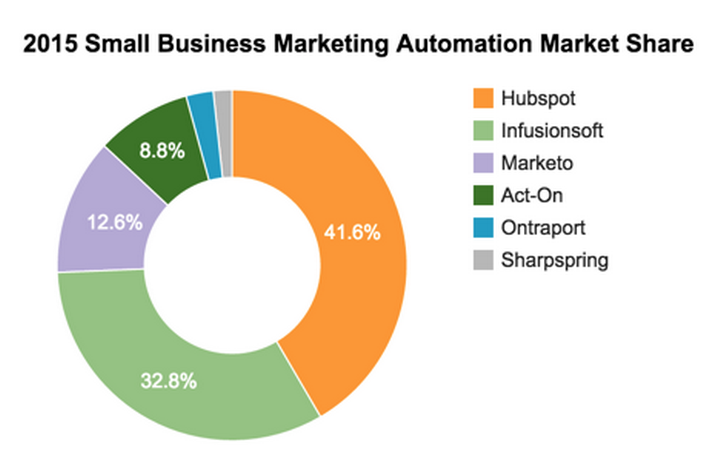 Which marketing automation tool has the highest market share among large businesses?

For the enterprise market, Pardot and Eloqua (now ‘Oracle Marketing Cloud’) are neck-and-neck with 31.2% and 30.2% market share. It’s important to remember, however, that this is based on the number of companies using each vendor, and not customer revenue or number of individual users.

While we did not collect revenue data in our study, a report by Mintigo found that despite only having a relatively small share of total users (7-8%), Eloqua received 26% of all marketing automation revenue. This is unsurprising given that their platform starts at $2,000 per month, and is used by the likes of American Express and Sony.

Which marketing automation software do the top 10k websites use?

All of the stats above are based on automation software used by over 309 million websites (approx. one third of the whole Internet). But what if we were to only look at the top 10,000 websites? What can we expect over the next 2-3 years?

Over the past three years we’ve seen exponential growth in marketing automation adoption, causing the industry to grow from being worth $225m to $1.6bn in a matter of five years.

Given the following truisms, it’s highly probable that this exponential growth will continue into the foreseeable future:

Whatever happens, it’s going to be a very interesting and exciting few years for the marketing automation vendors.

How this data was collected:
It’s important that we mention the limitations of our data: as not all vendors make their current usage numbers public, our conclusions should be interpreted as ‘a close estimate’, and not as gospel.

Our data was collected by combining data from BuiltWith®, a tool that monitors the technology used by over 309 million websites, with published usage figures, we were able to create two separate calculations based on each of these data sets.